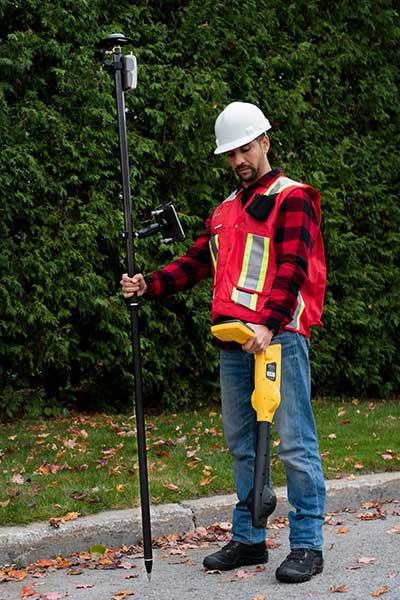 With Eos Locate for Collector, one field worker can collect both GNSS locations and locator data (such as depth below cover) for any buried asset including water, sewer, electric, cable, gas, fiber infrastructure and more. They can do so quickly, accurately and without the need for any additional field or office support.

“We are giving our Arrow GNSS customers a solution today that allows them to combine both locator data and high-accuracy locations in web maps,” Eos CTO Jean-Yves Lauture said. “This greatly simplifies their workflow by allowing one person to do underground locates and GIS mapping simultaneously.”

“This is a big step forward for utility organizations who need to gain better visibility of their infrastructure,” said Doug Morgenthaler, Esri program manager. “With today’s technology, utilities can already see where new assets are being put in the ground. The challenge historically has been figuring out where existing assets are.”

Eos Locate for Collector not only streamlines underground-asset mapping, but also improves office production times. It eliminates the need to manually combine datasets from the locator and GPS devices within ArcGIS.

“Seeing all that information from utility locators and GPS receivers packaged directly into a GIS application is exceptional,” Vivax-Metrotech Eastern Regional Sales Manager Kelvin Cherrington said. “This solution will help utilities create maps of their underground assets with a much more modern and efficient methodology.”

Earlier this year, Indiana American Water approached Eos to seek a solution that consolidated their utility-locate workflow with their Arrow and Collector field work.

“We had the manpower to put paint down,” said Todd Chapman, Indiana American Water Senior GIS Analyst. “But we would need to hire another person to map the locations with our Arrow Gold GNSS receivers.”

Chapman estimates Eos Locate for Collector will cut their field time in half as well as enable the creation of extremely accurate buried-infrastructure maps in ArcGIS.

“Previously, we were seeing that our old water mains could be off by up to 20 feet,” Chapman said. “With the new Eos Locate for Collector, we’re seeing that it’s accurate to under an inch.”

With accurate digital twins of their buried infrastructure, utilities across sectors can expect improvements to safety, damage prevention, field efficiency and regulatory compliance.

“Not only does this mean quicker responses to 811 tickets and fewer liabilities during field digs,” Lauture said. “But it also constitutes a major step forward toward the highly efficient future of 3D asset management and viable augmented-reality workflows.”